Solar Walk 3D – Explore the Cosmos On Your Tablet

Astronauts have to rely on dehydrated food packets and cope without gravity and running water. For tablet users with Solar Walk installed, space exploration can be a lot easier.

Of the many ways to enjoy a tablet, using it to travel through the solar system with Solar Walk has to rank as one of the coolest. Of course, tablet owners use their devices to check their email and read celebrity gossip, but being able to see what is happening on Neptune is quite literally out of this world.

Since the dawn of humans, we have looked to the skies and wondered what it is like “out there.” But even now, it is hard for most people to understand why Saturn has those beautiful rings.

The Solar Walk app provides a fully interactive educational tool that is fun for kids or anyone else interested in the solar system. The app includes breathtaking images of some of the most incredible sights in the solar system, from closeups of Jupiter and Saturn, to simulated solar eclipses and reenactments of the Sputnik and Mars rover missions.

It really is quite a sight to see the furnaces of the Sun burning and exploding in front of your eyes, and the Solar Walk app does a great job of offering users those amazing experiences.

From the Solar Walk Manual:

While the Solar Walk app provides the journey,
the FourFlexx tablet stand provides the base of the adventure.

To further improve your solar system experience on the iPad, let the FourFlexx tablet stand hold it for you

This tablet holder allows the user to enjoy the tablet experience without having to hold it up in an uncomfortable position. This flexible, versatile iPad accessory can be set up in any room of the house, and allows users to enjoy their tablet in hands-free comfort and convenience.

Parents can set up the FourFlexx in their children’s beds and explore the asteroid belt or the moons of Jupiter without their arm getting tired, or worrying that they will wake their sleeping child when they try to put away the tablet.

Transform Any Room Into a Planetarium 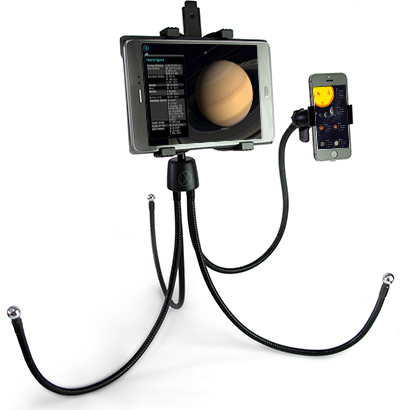 In addition to being used to hold up a tablet in bed (and allowing the user to become an astronaut), the FourFlexx tablet stand can be used in the kitchen, in the exercise room, and even in the car, on a plane or outdoors. It is totally portable, and can be adapted to almost any use one can imagine, given the four flexible arme that serve as the base of the unit.

One of the flexible, bendable arms can even be used to hold a smartphone, in order to ensure the user never misses an important call or message. In addition to all these great features, virtually any tablet can be used with the FourFlexx. 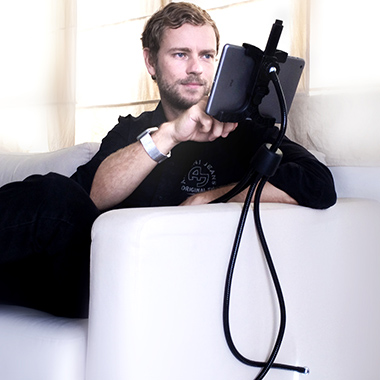 Adults and kids alike love the versatility of the FourFlexx. It can be attached to the side of a bunk bed or to the back of a car seat to allow the little ones to watch their favorite movies on long trips. It is designed to be enjoyed by the whole family. But when using the FourFlexx together with the Solar Walk app, just make sure you don’t have your feet planted too firmly on the ground.

The Solar Walk™ 2 app is available in the Apple iTunes Store
For more information, visit the vitotechnology website

The FourFlexx iPad stand is available in our WebShop
For more information on the FourFlexx, click here

At A Glance – The Wireless Charging Guide Infographic